Using a Balance wheel and Spring to regulate a wooden clock movement.


I had wondered for a while if it would be possible to regulate a wooden clock with a Balance wheel and spring instead of using a Pendulum. I'm not at all sure that it actually offers any advantage other than being far more compact, and that, of course, is where the original designs for this type of regulation originated.
The Lever escapement invented by Thomas Mudge in 1750, has been used in the vast majority of watches since the 19th century, despite its popularity it does have some drawbacks, the main one being that there are several points where friction occurs, so the incorporation of a gravity escapement could help overcome that when used in a wall mounted wooden clock.


To explore the possibilities further, I built a rig combining an existing Woodenclocks Gravity Escapement, with a Balance Wheel and Spring, instead of a  Pendulum used in the original. With some adjustment to the size and stiffness of the spring, the rig started to work.
Now I can start to look at a complete clock design using this concept to ensure that it would actually work in practice.

The action of the escapement is a little difficult to understand just from the video, but the following notes should hep. 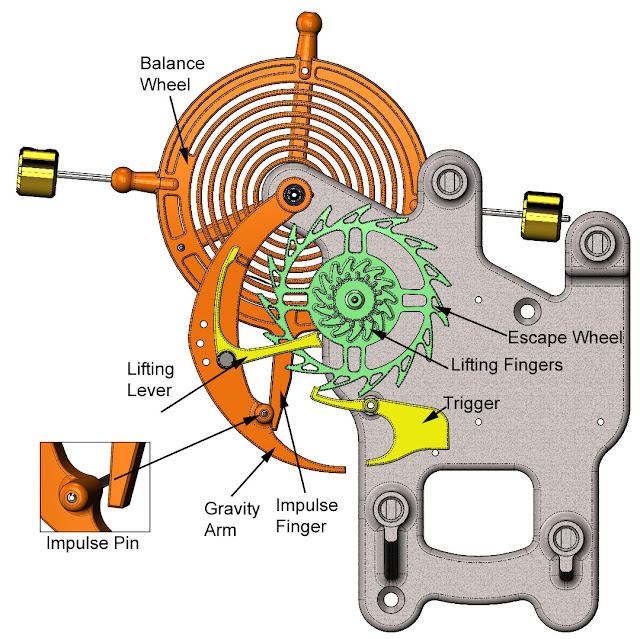 This is the view onto the Backplate of the new clock design with all the main components identified. 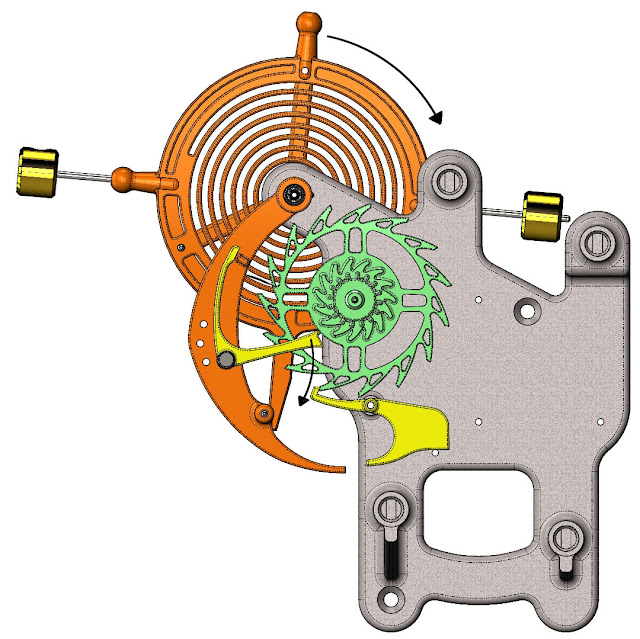 Position 1: The balance wheel has reached its furthest Clockwise position, The Gravity arm has been pushed back by the Impulse Finger and so allowed the Lifting Lever to be released  and dropped down to its stop position ready to engage the next Lifting finger when the movement is reversed. 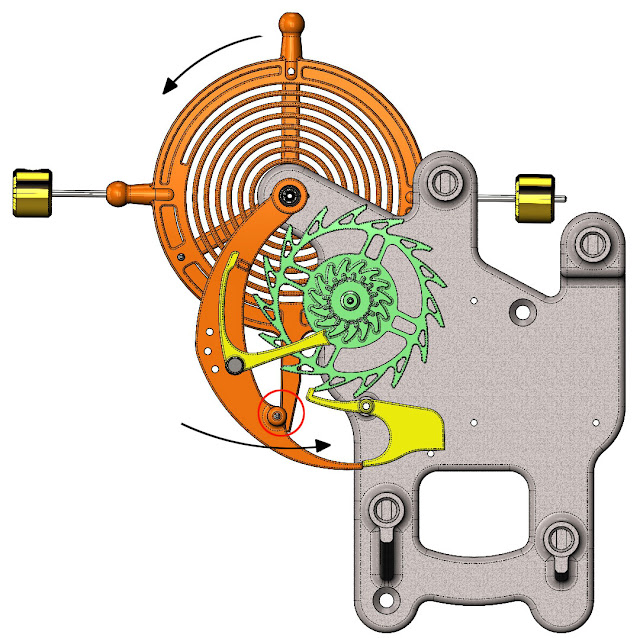 Position 2: The Gravity arm has now given its impulse to the Impulse Finger on the Balance wheel and the tip of the Gravity Arm is about to push on the trigger. 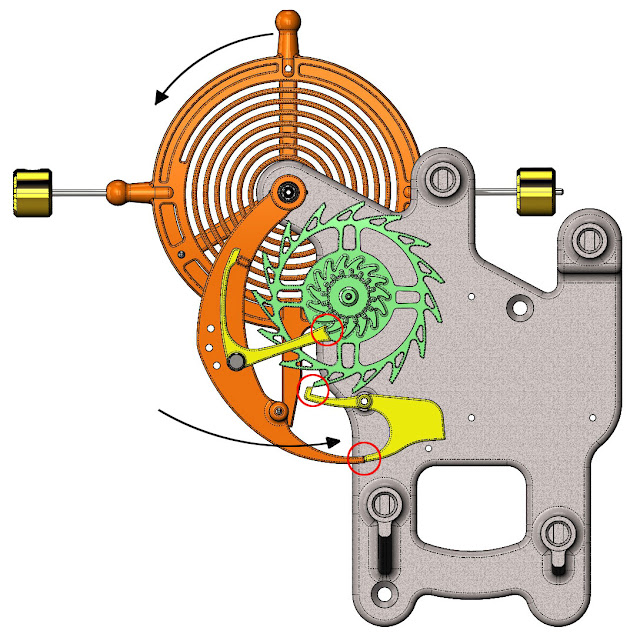 Position 3: The Gravity arm has now pushed the Trigger to release the Escape wheel, this must happen before the fork on the end of the Lifting Lever reaches Lifting Finger otherwise the mechanism will seize up. 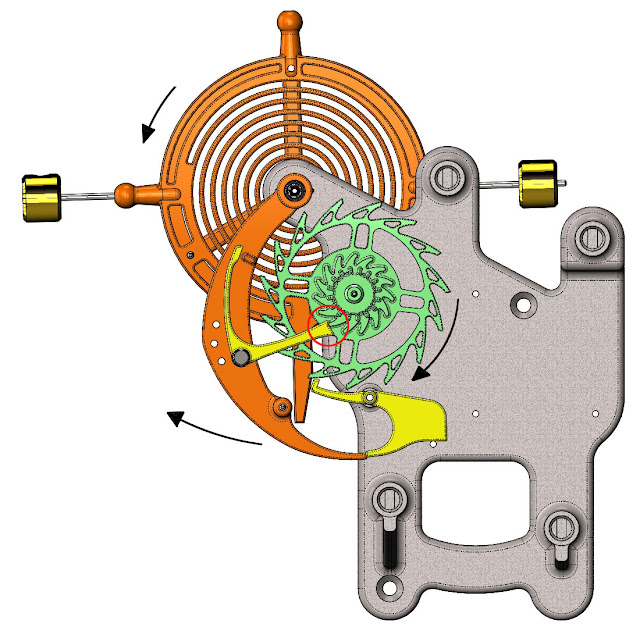 Position 4 The Gravity Arm is now being pushed back by the clockwise rotation of the Escape wheel, the Lifting Finger is causing this by pushing against the fork in the end of the Lifting Lever. 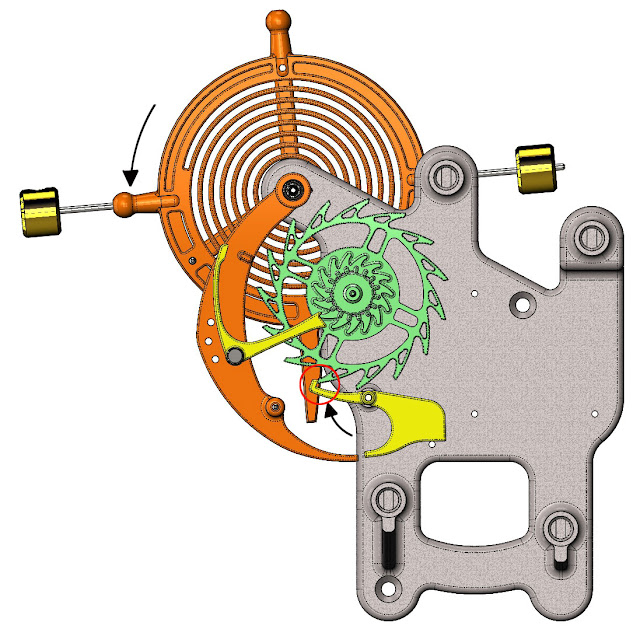 Position 5 As the Gravity Arm is pushed back the Trigger is also moving back to its locking position ready to stop the rotation of the Escape wheel any further. The Balance Wheel has now reached its furthest Anti-clockwise rotation. 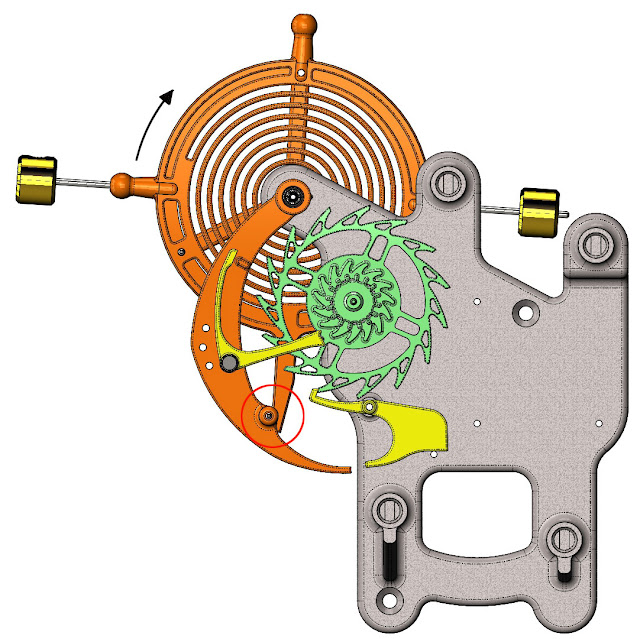 Position 6 - The Balance wheel is now free to move back Clockwise again and has nothing else to do until the Impulse Finger reaches the impulse pin to start the cycle over again.

Posted by Woodenclocks at 17:14 No comments: Links to this post