After developing the design of the Woodenclocks Gravity escapement to the point where it was working quite accurately I had started to think if there might be something else I could do with the clock design to improve the the overall efficiency of the clocks. I had always had problems with the gear train working smoothly and consistently, so this seemed a reasonable area to look at more carefully.
By the nature of a clock the gear train is going to have to start and stop with each action of the escapement, so when the escapement is engaged, the gear train stops moving and when it releases it will start moving again, this happens with every tick of the clock. The problem here is that each engagement of the escapement involves a certain amount of friction, and two types of friction at that. There is static friction which applies when you try to get an object to start moving and sliding friction which occurs whilst the object is moving, and it is the static friction that has the greater value. If you could reduce the number of times that the gear train has to stop and start then you can reduce impact of the static friction. This is important because one of the largest variable affecting the smooth running of the clock, is the friction in the gear train. This is going to vary all the time because the fit between the mating teeth in the train will constantly vary due to the small variations in both tooth geometry and the surface smoothness of the teeth we make for the wooden clocks. These variations are likely to be a lot bigger in our home-made clocks than those manufactured on industrial scale equipment, so if we can reduce the static friction we can improve the clocks running.

Remontoire action
One the ways to reduce the static friction in the drive train is to introduce a remontoire , the simplest type of  remontoire invented by Robert Robin in 1772. This invention is based on the endless rope system for winding clocks invented by Christiaan Huygens nearly hundred years earlier, and is deceptively simple in the way that it works. 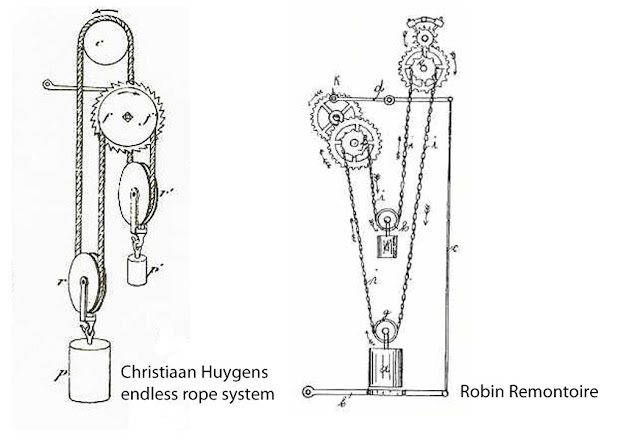 The Remontoire therefore has all benefits needed to reduce Static friction from the clock, and reduce the variations in friction generally from effecting the action of the Escapement . The next thing to do is to design and build a test rig to find which approach would best.
Four approaches were identified as being feasible and are listed below.

The first approach was a direct implementation of the Robin Remontoire. In the diagram shown above the basic design is laid out in a simple manner and I have used this as the starting point for the first rig. 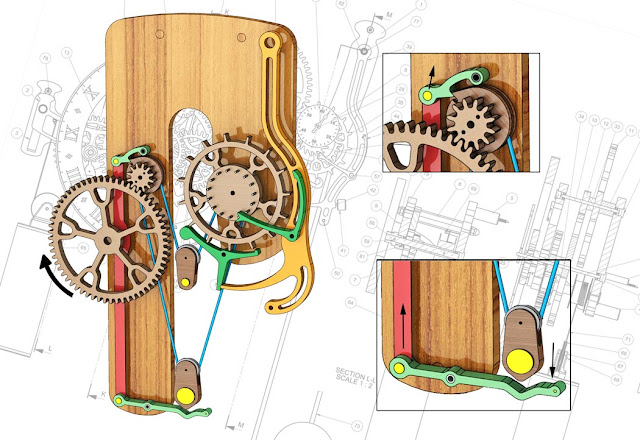 In this rig the drive is coming from the drive train indicated by the large arrow on the left, the drive train's rotation is halted by the latch shown in green at the top right.
At this point the Escapement is being driven by the small weight shown in the centre-bottom, it is supported on the endless cord shown in blue. This cord is wrapped around two equal size pulleys, one behind the small gear on the left and one behind the escapement. The small weight in the very centre keeps the cord in tension.
With each incremental rotation of the escapement the small escapement weight drops down closer to the green lever below it. When the weight touches down on the green lever, it pushes up the red strut on the left and lifts the latch at the top holding back the drive train. The gear train is now free to move and it lifts the small escapement weight back up as it rotates 1 revolution, stopping when gravity drops the latch to its rest position. This winding of the escapement weight takes place in the space of 1 tick of the escapement.
This is the Robin Remontoire in action, but it has problems, the major one is that it is difficult to stop the cord slipping, and even the smallest slippage will cause the clock to lose time. In practical terms I tried wrapping the cord around the pulley one and a half times, this failed as the cords kept getting locked up, I also tried lining the pulley with coarse grit emery cloth, this worked much better but did not keep the two sides exactly in sync. There was also an anomaly with the actuating of the latch release, sometimes it would take two goes by the escapement weight to complete the release, so for these reasons the Robin design driven by a cord was not going to work.
What it did show was that it could work if a chain or belt was used and the latch actuation was driven directly by the escapement. This was to be the route taken in the next design..

This next rig was designed so that a finger attached behind the Escape wheel, would actuate the latch directly and a ladder chain would be used in place of the cord used previously. 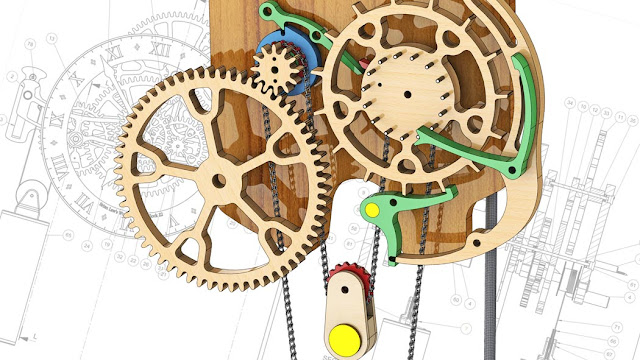 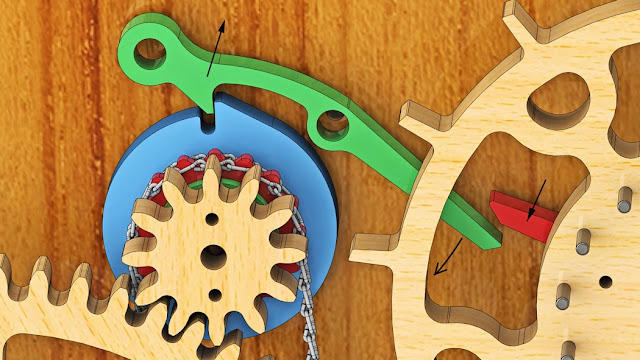 This arrangement worked much better, the finger shown above in red moves with the escape wheel and touches on the green latch to lift and release the drive train. The design of the finger/ lever action is arranged so that the lever is lifted and released inside one incremental movement of the escape wheel. That means that the drive train and the Escape wheel will always stay synchronized.

The only problem to emerge from this design was that the ladder chain would sometimes snag on the sprocket driving it, and then completely stop all movement.  This was probably due to the design of the sprocket itself, and as these were purchased as a pair, I didn't want to spend time designing a new one when there were other options to try.

I only really included this for the sake of completeness as I didn't particularly want include something as obviously modern into a wooden clock. I just think it would look odd.
Any way the arrangement is exactly the same as the previous one but the belt and pulley were used in place of the ladder chain and sprocket. 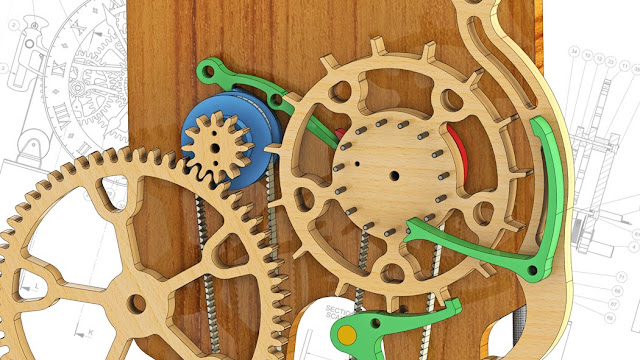 I only had 2 pulleys available for this test so the tension pulley was left off, in retrospect this was probably a mistake, as it was difficult to keep the teeth on the belt engaged with the pulley on the rewind. I used some small guide pulleys instead and in the main they worked but occasionally it would slip and lose sync.Had I used a third pulley and a tension weight it would have worked fine.

I probably should have started with this one as, chains have been used to drive clocks almost from the very start. I used a Chain /Sprocket Grandfather clock repair kit that worked quite well fitting it into the rig. https://www.cousinsuk.com/product/conversion-chain-kits?code=L33579 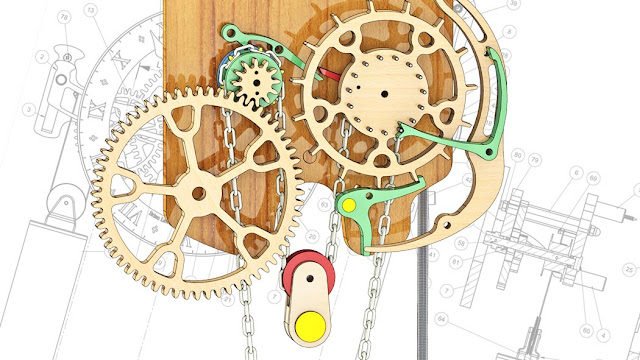 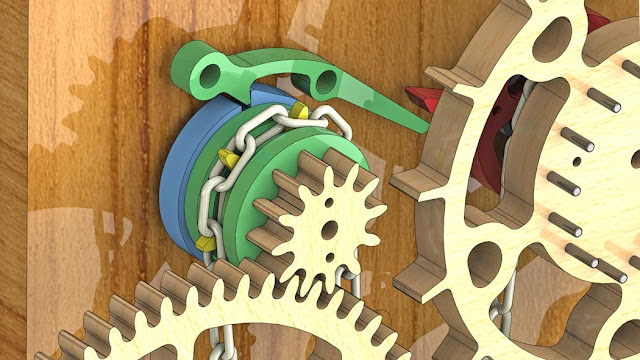 It worked straight the way and never slipped, jumped or went out of sync, its only problem was that it may have been a bit coarse being a 33 links/foot chain so next time I would use a 42 links/foot and redesign the sprocket to suit.

To clarify where the remontoire would sit in a finished clock. 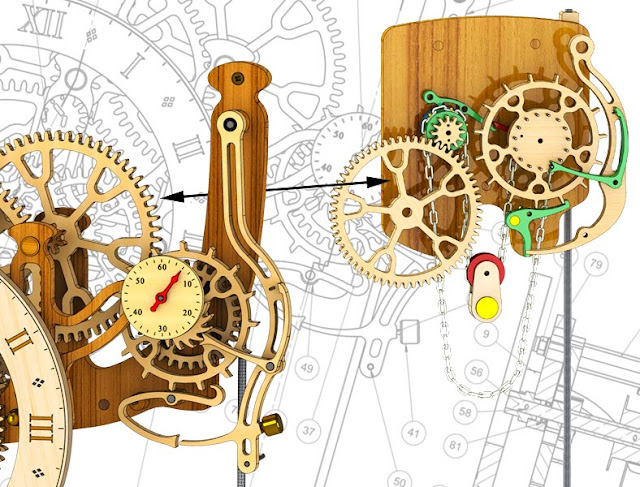 In conclusion then it seems clear that the concept can work alongside the woodenclocks gravity escapement, and would add an interesting visual feature to the clock when built.
Clock 26 will now be designed with the Remontoire shown in design 4 included.


A video of all 4 of the escapements in action can be viewed here https://youtu.be/FIBXzdK0y7A