How the Woodenclocks gravity escapement works

When Clock 20 was designed it incorporated the new woodenclocks gravity escapement  The design of this escapement was based on the Arnfield escapement developed by Jim Arnfield in 1987. He devised a method to completely isolate the pendulum from any and all sources friction that could act on the pendulum, something that had never been achieved before. It works by having a separate arm that provides the impulse to the pendulum, its called the Gravity Arm, it provides a precise consistent impulse to the pendulum and isolates the pendulum from any other moving parts in the clock. The benefit of this is that it reduces the sources of error that can creep into the clock mechanism over time. I have modified the design of the Arnfield quite a bit so as to be able to use it in the new wooden clock designs. The escapement release parts have all been gathered together at the bottom of the escape wheel to reduce the inaccuracies that can occur over larger distances when using wood. This also has the advantage of reducing the effort needed to release the mechanism so reducing the over all weight needed to drive the clock. The other major change from the Arnfield design to create a 15 legged escapement instead of the 6 legs used in the Arnfield, this slows down the rotation of the escape wheel so reducing the reduction ratio to drive the minute shaft which in turn reduces the driving weight even more.

The original Woodenclocks Gravity Escapement utilised a 6 legged catch between the trigger and the escape wheel, to arrest the movement, the latest Clock 22 does away with the 6 legged catch and lets the Trigger engage directly, this is simpler and more efficient and is used in the description below.

The escapement components are all shown here in this first view, the Gravity arm has the Lifting lever , the Impulse pin and the Weight mounted on it. The impulse pin is used to transmit the force of the moving Gravity arm into the pendulum, just a small amount to keep the pendulum ticking, this can be adjusted by changing the size of the weight. The pendulum motion is always shown in green arrows in the following, with all other movements and actions shown with red arrows

In this first step the pendulum has reached its left most position and is just turning to swing back to the right, nothing else is moving at this stage. 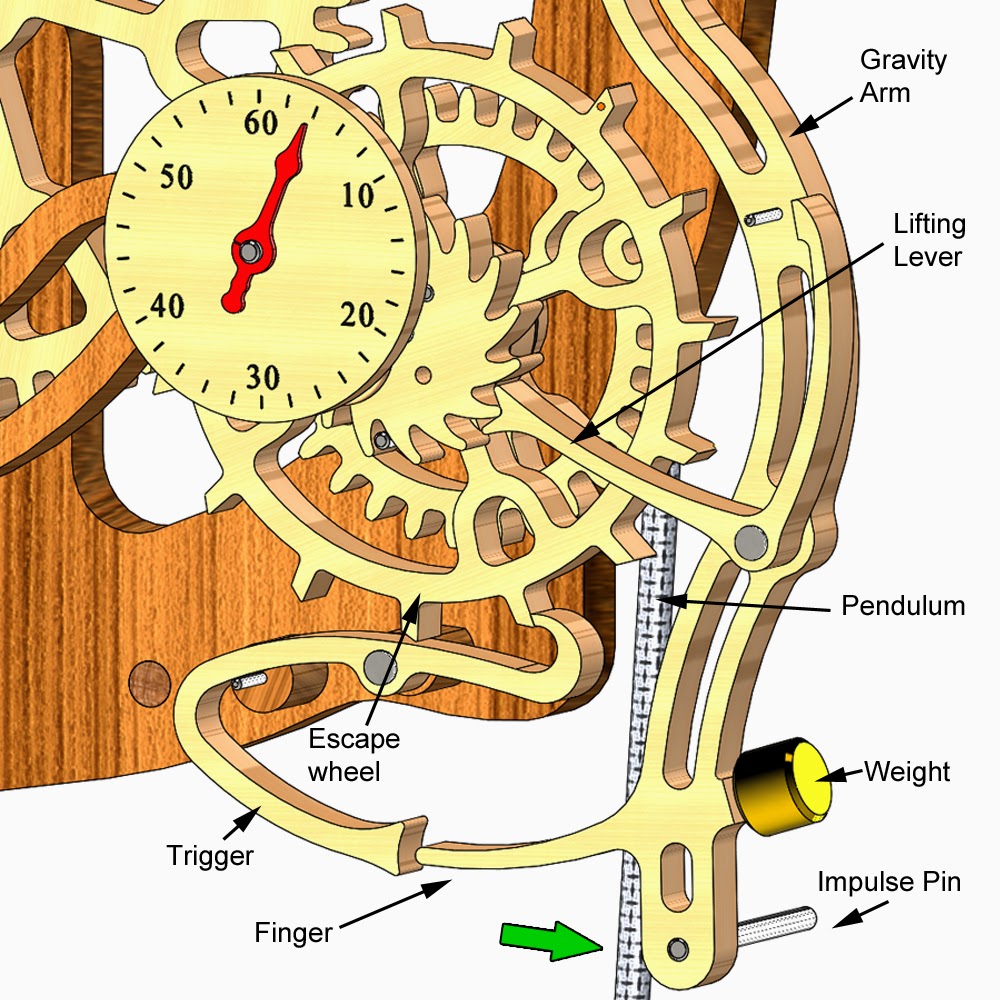 In the second step the Pendulum has swung over to the right and has just made contact with the Impulse pin. At this time the gravity arm is in its lowest position and it is being held in place by the Lifting lever. The lifting Lever is sitting against one of the curved teeth on on the inner ring of the Escapement wheel and the Escape wheel is locked in place by the Trigger. 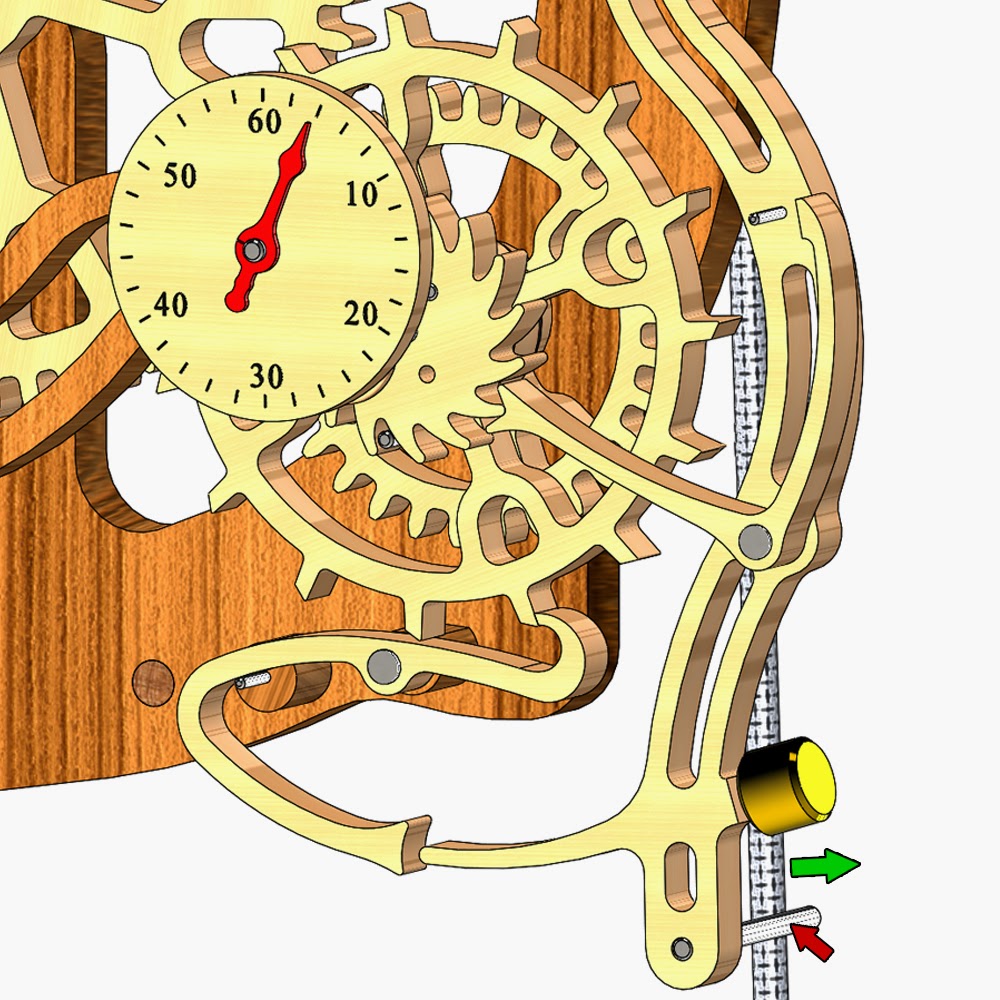 In the third step the pendulum starts to push the gravity arm to the right until it reaches the end of its stroke, by which time the the lift lever has dropped clear of the tooth holding it. Its travel is restricted by a stop pin at the top of the lifting lever that holds it in position. Now its the turn of the Gravity arm to take over and start to push the pendulum via the impulse pin towards the left, over the short distance it travels until it hits the trigger is when it adds the impulse to the pendulum to keep it ticking. The forked end of the lifting arm is travelling towards the curved tooth but it is vital that it doesn't get there before the trigger is released. 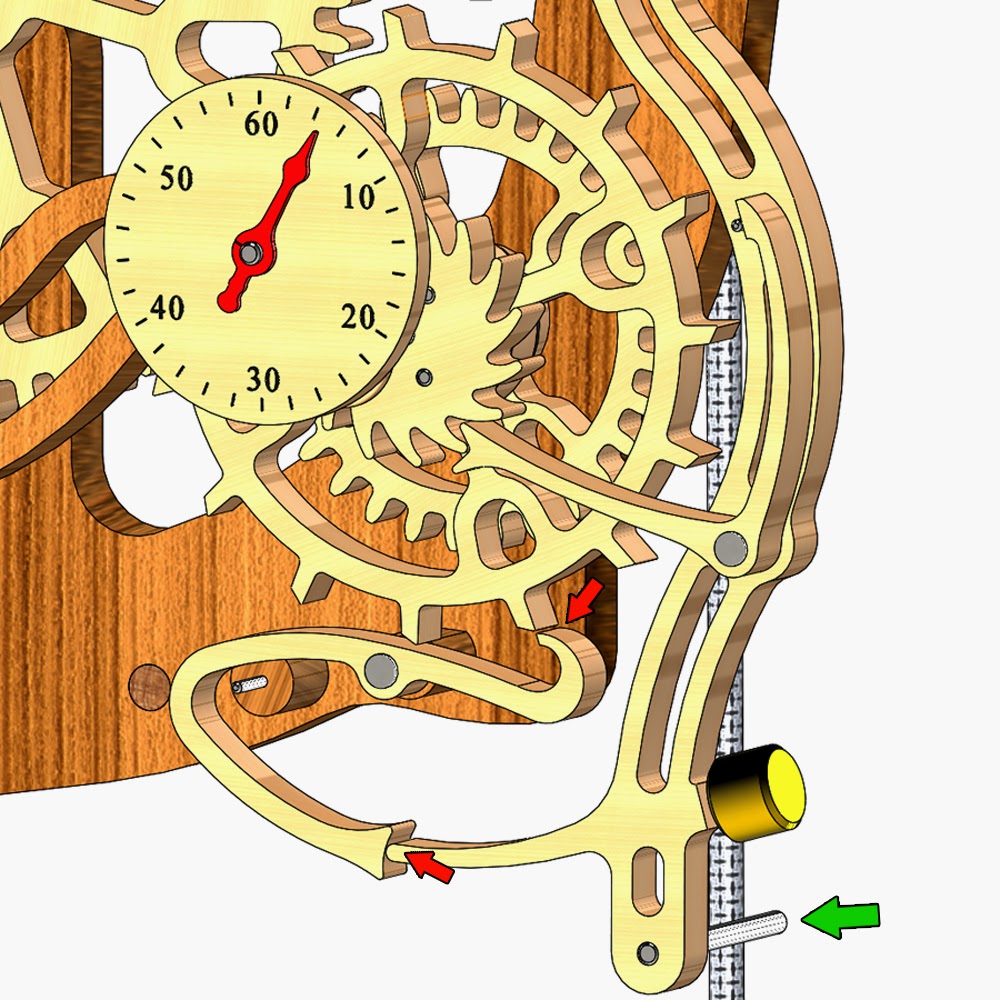 When the finger contacts the trigger it pushes on it and it turns and disengages from the the Escape wheel, this in turn will allow the escape wheel to start turning and push the Lifting Lever/Gravity arm back. It should be noted that this release is not felt by the pendulum, so the friction involved in triggering the release is nor felt by it either. 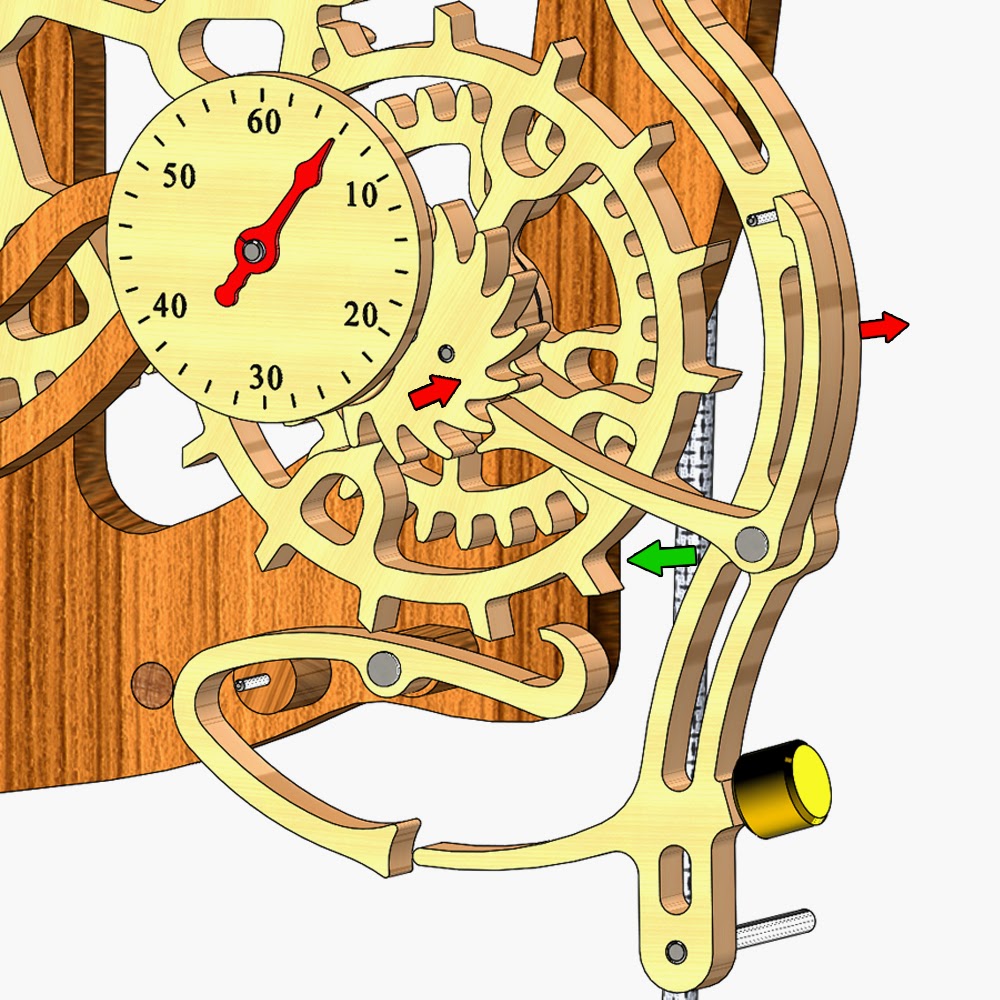 In the final step the pendulum carries on to reach the start point of the sequence and the escapement wheel is once again locked by the trigger returning to its rest position. The triggers centre of gravity ensures it falls back to its stop pin. 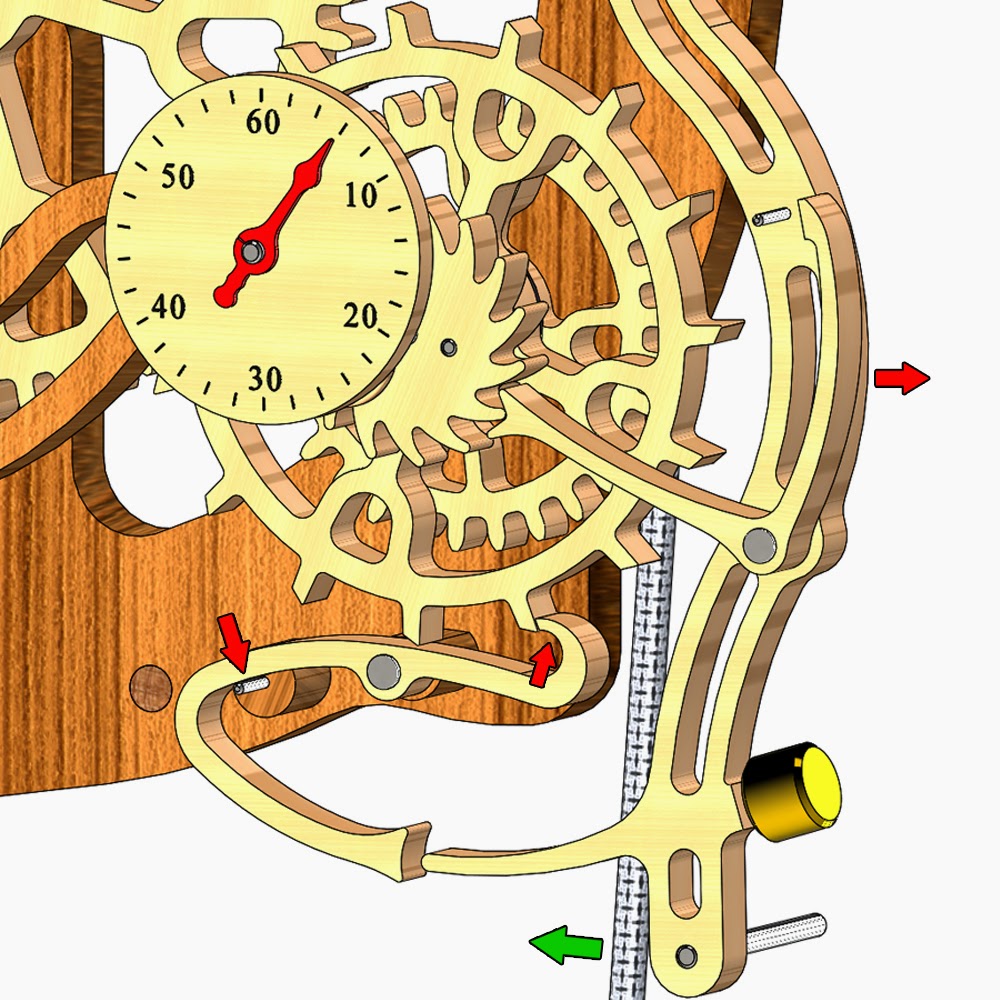 Despite the long explanation this is a simple escapement that provides a most accurate method of controlling the motion of the clock.

Finally just 4 points to help setting up the escapement for the first time.